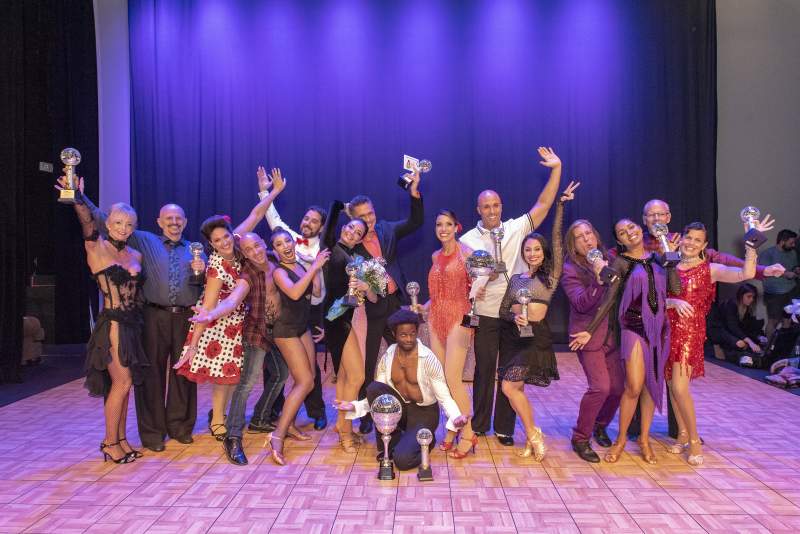 September 2019 was a dramatic month with Hurricane Dorian roaring up the coastline. While the storm made fundraising more difficult for this year’s contestants, an unexpected donation three days after the show, brought this year’s total to a new all-time high.

If you’ve never been a part of the excitement that is Dancing with the Martin Stars presented by Martin County Healthy Start Coalition, you are missing out on a spectacular evening. This year’s event was held on September 28 at The Lyric Theatre with a sponsors’ reception at Flagler Place before the event.

In my opinion, this event is the equivalent of an Ironman Competition. Each contestant must learn how to dance ballroom style using current music. Dances performed included the Argentine Tango, Fox Trot, West Coast Swing, Salsa, Disco/Cha Cha and Jazz/Hip Hop.

In addition to mastering the dance routine in three months, the stars are committed to fundraising for Healthy Start. This can include sponsorships from businesses, soliciting family and friends and hosting special parties and events to raise funds. And for the grand finale, they perform onstage in front of 500 friends and strangers. That requires bravado.

Local philanthropist David Smythe attended the show and was very impressed by what he learned about Healthy Start. David’s love of children and his generosity motivated him to donate $50,000 several days after the event.

His unexpected donation vaulted this year’s total to $177,500, the highest amount ever raised.
“This is truly a game-changing donation for our organization that will strengthen our mission to help healthy babies grow into healthy children. Martin County is so fortunate to have David Smythe invested in Martin County’s children. It is truly a blessing. Words alone cannot express our gratitude,” Samantha said.

Eight contestants competed to grab the top honors: Eddie Arguelles; David Bradford; Kim Brisky; Laura Crawford; Fabi Gonzalez; Dean Lopes; Maggie Slobasky; and Amy Snow. Each contestant is paired up with a professional instructor who volunteers their time to transform their partner into a dancing machine.

The contestants were judged by Charles Jones, Andrea and Dmitriy Kuzmenko;all are professional dancers and well qualified to judge the competition.

The evening opened with a feisty, high-powered dance routine by Marianella’s Dance Fusion Latin Addiction team. Before the winners were announced, instructors Bob Murray and Alannah Ghazal, known as TeamTango, wowed the audience with a Tango danced to Amor O Nada.

The StarStruck Production Team, powered by the talented duo of Jennifer and Peter Jones and crew, brings to the stage a first-class production, where everyone shines as a winner.

There are two award categories, fundraising and dancing with one overall winner.

The winners are:
Overall Winner: Maggie Slobasky and Travis Scott

A huge round of applause for the many wonderful and talented people in our community who stretch themselves to benefit the youngest among us. Top sponsors were: David Smythe, Cleveland Clinic Martin Health; Global Neuro and Spine; Skin Serenity Spa; and The Gordana Uscumlic Foundation.
Dancing with the Martin Stars began in 2011 and has raised over one million dollars to support their mission. Martin County Healthy Start Coalition works to ensure that every Martin County baby is born healthy. They recently relocated the Betty Moore Prenatal Outreach Center to 963 SE Federal Highway, Stuart.
Programs include: Healthy Start Screening; Care Coordination; Health Navigation; Prenatal Outreach Center; Childbirth and Pregnancy Education; Beds 4 Babies; and Inter-Conception Education. 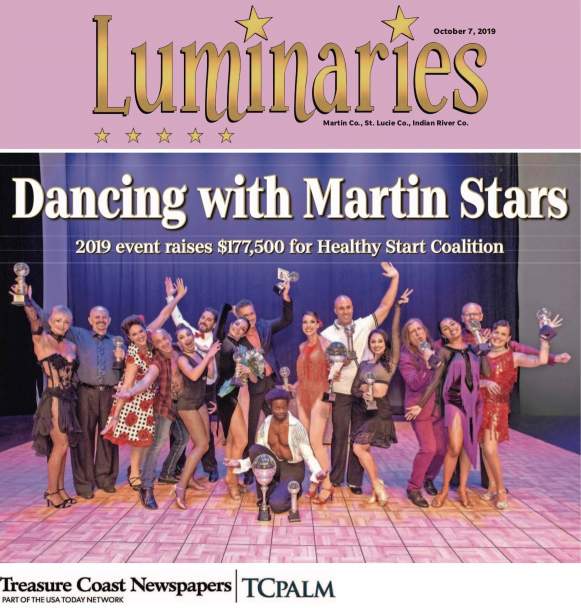 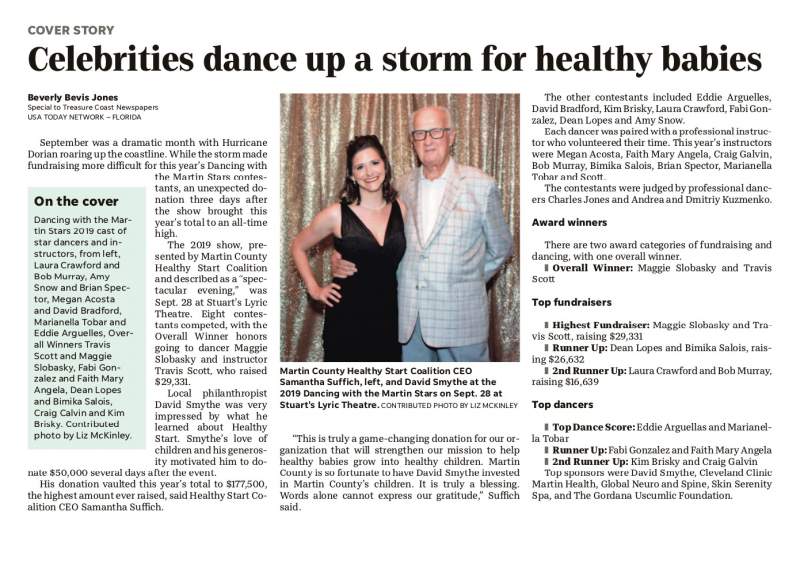